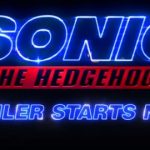 It has arrived and its….its something.

I have been in the Sonic video game world since his first game on the Sega Genesis. It’s a killer game! Those first 4 games (I’m including Sonic & Knuckles) are some of the best games out there. During the 90’s, Sonic was everywhere…and his Saturday Morning Cartoon series was awesome along with the Archie Comic Book series.

It’s 2019…Sonic is still decently popular, but not like he once was. However Paramount Pictures feels as though it’s still 1995 and a LIVE ACTION Sonic the Hedgehog movie is on it’s way, and the first trailer is here for your enjoyment.

Remember that 1995 statement I just posted? Yea, JIM CARREY is in this movie too! (Honestly, he looks pretty good for being Dr. Eggman, so I’ll let him pass)

Feast your eyes on the oddest version of the fast Hedgehog you’ll ever see.

I don’t usually like to pull the whole “MY GENERATION WAS BETTER” thing…but seriously…the Sonic of my generation was much better.