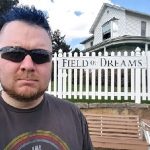 If you live in Iowa, you probably know at this point that the uber popular film Field of Dreams was filmed here.

And if you didn’t know Field of Dreams was filmed here, then do you really live in Iowa? Funny enough, my wife and I have wanted to visit the area for some time, but it’s one of those things that is JUST out of reach that you think, ‘We’ll get to that someday.’ This weekend on the way back from Dubuque with my parents (who were visiting), we saw the sign saying that the field was off the exit in Dyersville…..when in Rome right?

I love visiting filming sites of my favorite films. I have always just wanted to visit some of the big movie cities like Chicago, New York, or Los Angeles JUST to visit filming locations of some of my favorite movies. One of my big ones has always been the Ghostbusters Firehouse (which is a real working firehouse in New York).

The Field of Dreams field is a pretty cool place to visit. There also happened to be a kids baseball game going on at the time, so seeing a flood of vehicles coming into the park reminded me of the end of the film! Plus seeing the line of people all buying merchandise from the film was crazy! They had all sorts of T-shirts, keychains, postcards, etc. If you’re a fan of this film? Then this is obviously the place you gotta check out.

I think what I like best about it is that not only is it a former movie set, but it has this sense of calm. It’s really in the middle of the wide open land of Iowa, and I happened to be there when the sun was beginning to set so it was pretty near perfect time to visit.

I finally crossed that one of my bucket list of Iowa….or Heaven.