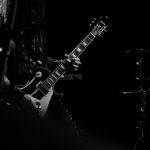 I don’t think KORN will ever quit.  At least I hope they don’t, as they’re one of my top two favorite bands.  26 years strong, and they’re still pumping out the goods.  They released the visualizer to their new song, “Cold”.  The song is from their upcoming album, “The Nothing”, which will be released on September 13th.

The band says their new album is one of the darkest they’ve made.  Can’t wait!  They’re touring with Alice In Chains right now.  Click HERE to see their tour dates and locations.