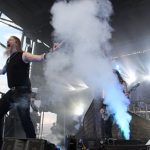 Godsmack? Disturbed? Shinedown? Yea, you know all about them already.

Those bands rock the world in many different ways, you all know them and love them. They do VERY well in America and will always continue too! The world music landscape is COVERED with all sorts of different sounds, melodies, and hard rocking guitar. Thanks to the internet, we are able to search all sorts of different coasts for different bands…YouTube does pretty well at that.

My iPod is loaded with music from all around the world, and while you may like to believe I JUST listen to Rock 108 music…I would be doing myself a disservice by not expanding my horizons in music! Thus I am going to share with you some bands that I online that you might enjoy.

You may know some of them, but that means your just as exploratory as I am!

3 vocalists…Clean Female, Clean Male, and Guttural Male….combine those 3 together with an amazing band and you get some really hair raising melodies. The chorus lines the music are always intoxicating to listen too. I found this band by searching on YouTube years ago by searching ‘Female Metal Vocalist’ and they popped up…and have been a fan ever since.

This is easily one of my top 10 favorite bands of all time.

Songs to check out: The Nexus, Digital World, Hunger, 100,000 Light Years, Amaranthine, Burn with Me

Metal, War, and a stage show that could probably rival KISS….Sabaton. I have seen these guys a couple of times in America and man…do I love them.

They’re the definition of one of those bands that look like they are having an absolute blast one stage. I saw them for the first time open up for Iced Earth and my friend was WAY more excited for Sabaton, and I wasn’t sure why…until they blasted onto the stage and everyone forgot that Iced Earth was performing that night. Sabaton is one of those bands that it’s rough to have them open for you, cause they will dominate the night with their energy, fist pumping rock, and a guarantee of a good time.

You know of, you’ve heard of them…and chances are…you probably hate them. Here is my response to that….

This band rocks alright? And if you can’t get past the girls dancing along and singing to the music…then listen to how solid that damn band is, AKA KamiBand. The music has good melody, sing along chorus (even in Japanese), and their song ‘Road to Resistance’ is a hair raising experience of guitar. Usually people thing about the song ‘Gimme Chocolate’…but if you start digging into their albums, there is some really cool stuff to listen to.

Songs to check out: Road to Resistance, Gimme Chocolate, Karate, Yava, The One

If you went to the Slipknot show this past weekend, you saw these guys open up the show, and hopefully some of you were impressed…because yea…they’re awesome.

Now they’re not everyone’s cup of tea cause they’re pretty heavy, but if you hang around enough, they freakin’ rock man. They’re not super gutteral vocals, you can understand them, but I think that’s what I like about it so much. It has a lot of emotion in their vocals, and it very head-bangy.

I’ll round it out with the one that is probably one of the more heavy bands that listen to, and that is Arch Enemy.

Something about a guttural female vocalist, and that appeals to me, I think cause it’s something that I don’t hear everyday you know? Originally fronted by Angela Gassow and now Alyssa White-Gluz, Arch Enemy is unlike anything you will hear on the radio. I’ve been a fan of this band for awhile, but that being said…I CAN’T listen to this band casually.

I know it sounds crazy…but I can only listen to Arch Enemy if I am either working out or doing stuff around the house, I think cause it’s motivating. The guitarist Jeff Loomis is guitar god, and really backs the band incredibly well. Also did you know that vocalist Alyssa White-Gluz is a die hard Vegan AND dating Doyle (Misfits guitarist/solo)? It’s like the most metal couple ever.

It’s metal, it’s brutal, it’s not for everyone…but I like it.

Songs to check out: Nemesis, War Eternal, The World is Yours, You Will Know My Name