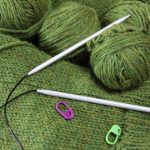 The green cardigan that Kurt Cobain wore on “MTV Unplugged” is going up for auction . . . AND it’s never been washed!  You can buy it complete with stains and cigarette burns.

Don’t remember what it looks like?  Check it out here during “MTV Unplugged” recorded in 1993.

The current owner is an anonymous businessman.  He apparently has kept the sweater stored in a safe in acid-free tissue. This person bought it at auction in 2015 for $137,500.

The auction house says, “It’s very important that we don’t wash it.  The stains are still there.  There’s even cigarettes burns that you can see on the sweater.”

Gross and creepy, or awesome?  I can’t quite decide yet…

Check out the auction listing HERE