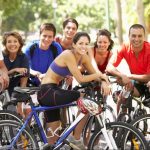 Geezer Rant: In an staggering message of “screw you, I have ethics even if you don’t”, the entire staff of RAGBRAI, that bike ride across Iowa, has resigned over the Des Moines Register’s handling of the Carson King story.

Ride director TJ Juskiewicz  says he received many questions about the Carson King/Register events of late, but the Register’s public relations staff wouldn’t let him answer publicly and only offered him a list of approved “talking points” to deflect from the issue.

The DM Register founded RAGBRAI, but the ride has (err…had) its own staff– because today in a shot heard around Iowa, they all resigned leaving the Register with a legendary name and no credible staff– a fitting metaphor for the paper itself.

Mr. Juskiewicz, announced earlier today a new ride across Iowa being called “Iowa’s Ride”  is going to happen the same week in late July when RAGBRAI was held.  The Register continues to not address something that needs a full-throated apology to Carson, the people of Iowa, Stead’s Children’s Hospital and now RAGBRAI.  In the meantime, this writer has respect for Juskiewicz and the entire former staff of RAGBRAI for doing business in an ethical way and one that we can all learn from. Register: GET OFF MY LAWN.