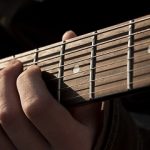 Man that lasted awhile didn’t it.

This day 14 years ago, Guitar Hero made it’s way to consoles and defined a generation of rockers.

Dance Dance Revolution was a cultural phenomenon, people tapping their feet to the buttons on the floor was a lot of fun! But, what about the people that didn’t really want to move as much, those people that wanted to be a rock star but didn’t have money to actually purchase a guitar….that’s where Guitar Hero came from.

The first Guitar Hero game brought it to the world, people started to get curious about what this game was…it really wasn’t until Guitar Hero 2 and 3 that it shot to the stratosphere. The original Guitar Hero were ‘cover tracks’ of popular songs like Thunder Kiss ’65, Godzilla, Smoke on the Water, Cowboys from Hell, and many many others…everyone had a favorite Guitar Hero song. It was a fun game! My friend Bruce purchased a Playstation 2 JUST to play Guitar Hero and we’d all go over to his place to play it. I didn’t end up getting Guitar Hero until Xbox 360 released GH2.

Quick thing though behind the scenes….Guitar Hero was a money maker for recording artist and record labels. During this time, digital downloads of music was exploding and people were buying less and less CD”s…so how does the label make more money? License out their music to these games and sell them of DLC for Guitar Hero/Rock Band. For awhile? It was millions of bucks for labels and artist….well probably more labels.

14 years ago, the Guitar Hero phenomenon began…and later on…died out.