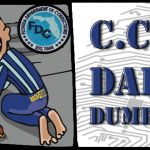 A drunk 47-year-old Kentucky man shoved a police officer because he wanted to join his girlfriend who was in jail.

The man called the police to his home to report his laptop had been stolen. When officers arrived, the man admitted his computer wasn’t stolen and asked if assaulting a cop would lead to five months in jail.

He said his girlfriend was in jail and he wanted to join her so he shoved the officer in his shoulder.

The man also pulled out a box from under his couch that contained over 20 grams of meth.

He was then arrested but continued to tell the officer where more drugs were hidden in his home. It isn’t known if he is going to the same jail as his girlfriend.  DUMBASS!