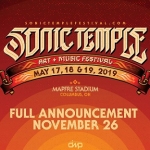 If you are a festival bug like myself, you’d know Columbus, OH ‘Rock on the Range’ festival was one of the biggest rock festivals in the nation. Former headliners like Tool, Slipknot, Metallica, Rob Zombie, and more. However things changed when ROTR changed their name to ‘Sonic Temple’ and fans started wondering what the heck was going on and speculated that EVERYTHING had changed.

Earlier today, presenter Danny Whimmer in a Facebook video went on record to tell the world that this is 100% a ROCK FESTIVAL…and that will never change. So, how do you top headliners like Metallica?

Today, Sonic Temple’s official Facebook page mentioned that they will release their official lineup on November 26th. They also released a HINT of what is to come, and it didn’t take long for fans to start guessing what they were referring too.

Sonic Temple posted some coordinates…which pointed out to the word ‘DISORDER’ which then began the speculation that the massively fan demanded System of a Down will be performing for the inagural Sonic Temple Festival.

Again, ALL speculation…but if that is indeed truth…I’m head back to Columbus, OH!