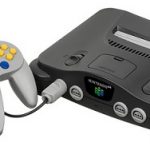 Nothing sometimes could be as angering and frustrating as the original Mario Party on Nintendo 64.

Yes, the original Mario Party for Nintendo 64 is officially 20 years old…and man…did I want to toss this stupid game out the window when I would rent it.

Since then, there have been like 11 different Mario Party games. An interactive mini game board game experience for up to 4 players to play and have some fun…but your patience and friendships were QUICKLY tested because there was always one friend that would get angry, toss the controller, or whatever it may be. Sometimes the ‘cheap moves’ people would do during the game would be enough to piss anyone off. Hell I remember one time an ex-girlfriend and I got into a fight because of this game…but she sucked anyway….so whatever.

Oh…and don’t EVEN get me started on the Computer Players…those Mother ‘effers just exist to make your life a living hell. The computer players ALWAYS seem to get the upper hand NO MATTER what difficulty you put the setting on…or I just suck…but either way.

I hate these damn games.