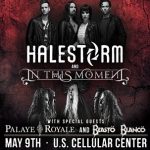 Halestorm along with In This Moment rocks the US Cellular Center on May 9th! Tickets are on sale right now!

Before the show though in about a month, guitarist from the one and only Halestorm called into the studio to chat about all sorts of cool stuff!

What did we talk about?

Joe briefly mentioned this 10th Anniversary of their first album to which I think might be the first time anyone from the band has mentioned it! According to Joe, they are currently working on the tracks right now for it, but no release date or even what might be included with the package…but that’s pretty exciting!

You can listen to the full chat below!