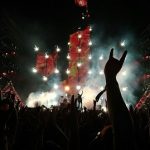 Yes, the early 2000’s Nu Metal act Staind is making their way back to the rock n’ roll world after a very long hiatus while singer Aaron Lewis did his country thing.

Staind never really left though, they have always been kind of around, but nothing really under the banner of the band since 2014, so it has been a few years.

Their first reunion show will take place at this years Louder Than Life festival, which will take place in Kentucky this September. Also billed for the show is Guns N’ Roses, Slipknot, Rob Zombie, Disturbed, and more.

Will you be making the trek to see Staind return to the stage?