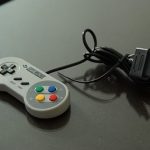 Man, where did the time go?

23 years ago, a little game named ‘Super Mario RPG; Legend of the Seven Stars’ was released on the Super Nintendo. To this day, it is still one of my favorite games to play through. Heck, even about a year ago I played though the whole thing on Twitch and STILL have a blast playing it.

It was a mind blowing experience. Think Final Fantasy x Super Mario Bros….it was a risky move, but a risk that worked out really well. I remember playing this game for the first time with my brother. We rented it from Blockbuster one night where we stayed at my Dad’s place. We ended up staying up REALLY late, so late that my Dad came out to the living room and said, ‘Guys, you NEED to go to bed.‘ That’s one of those memories that just kinda sit around in my brain…not sure why, but it’s there..

Mario RPG had a cast of unique characters that sadly we have not seen since this game.

Just a crazy cast that continuously broke the 4th wall and was overall a very fun experience, and has never been truly replicated. I know that this game spawned the very popular ‘Paper Mario’ series, but it just didn’t have the same charm.

We’ll probably never get a true sequel to this game, and honestly that’s fine. It’s near perfect the way that it is as a stand-alone game.