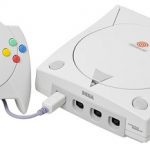 20 years ago, a dream was realized by Sega.

Back in the 90’s, video gaming was dominated by Sega Genesis and Super Nintendo…then a looming beast approached named Sony Playstation and quickly took over Sega’s spot in the world of gaming. It took out the Sega Saturn, Sega 32X, and other consoles…but Sega wanted to give it one more shot to assert their dominance in the video game world.

Dreamcast had a load of titles that fans still love to this day. Crazy Taxi, Grandia 2, Resident Evil: Code Veronica, Power Stone 1 & 2, 2K Sports series, etc. For the time, is was one of the biggest consoles! It was unique and could you imagine? A 56K modem attached so you could play online with SegaNet! Gaming online through a game console was really a new thing and while common place today, it wasn’t really in 1999 unless you had a PC. Also, asking your parents to spend money to jam up the phone line to play games? Yea….wasn’t the easiest conversation.

That sad part about the Dreamcast is that it was a placeholder for most….as the looming Playstation 2 was just around the corner, and it had a DVD player….something that Dreamcast didn’t have and many think was a ‘killer’ for the console. For those that did invest into the Dreamcast though, they found a lot to love about the game console. I personally didn’t get one until much later in it’s life, but the games I do have for it are a lot of fun!

After Dreamcast, Sega’s console market dissolved and we never saw a new Sega console ever again…and that’s probably for the best, but for a time…it was one of the go-to game consoles.