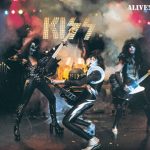 Now I’m only 32, but I gotta say this is probably one of the greatest live albums ever recorded.

44 years ago today, KISS released the album that shot them into the stratosphere of popularity, ‘Alive!’

Many people during the 70’s didn’t really discover KISS until this album was released. KISS had there fans to see their insane live shows, but they never really purchased the albums. Fans didn’t really go for the albums because they felt that the albums didn’t capture the sound that they brought to their live shows….so in a last stretch effort, they took the risk of making a live album, and it paid off…insanely.

You have probably heard the live version of ‘Rock N’ Roll All Nite’ on Rock 108 and countless other radio stations…well…Alive! is where that version of the song came from.

As a 32 year old man, I did not discover KISS through this album like many did…for me, it was their greatest hits album ‘Double Platinum.’ I didn’t really discover Alive! until a little later in my fandom. By rockers today all credit Alive! as the album that got them into playing rock music….Jason Hook (FFDP), Fred Durst (Limp Bizkit), Rob Zombie, Marilyn Manson…seriously the list could go on.

It was KISS’ Alive! that lit the fire of many of your favorite artist.