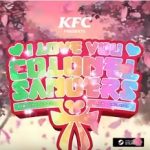 Video games can sure be a fun a strange world, and when big corporations have a fun spokesperson…they can be even crazier.

At one point, Burger King & McDonalds have all had their own branded video games. Starting all the way in the early 90’s, they were usually aimed at kids. Burger King released a few where their creepy King brought people food, did go karts, and even raced on courses! They were stupid, but tongue in cheek fun….but what about the legendary Colonel Sanders? Why doesn’t he have a video game? Well he does now, and it’s not about serving chicken.

It’s a dating simulator…where you play as a culinary student attempting to ‘woo’ a young looking Colonel Sanders.

Yes it’s true, and yes…it will be released on Steam via PC. If you have never played a dating sim game, it’s basically a text based adventure with an anime style where you answer the right questions to get someone to like you in the game, in this case…the Colonel. It’s odd, strange, but I can’t help but see the humor in all of this. The Colonel when he’s not serving up the secret recipe chicken is an interesting spokesperson…I mean, he just looks like a normal dude serving chicken. In recent years, the Colonel has become kind legendary, being played by all sorts of random actors like Norm McDonald (which was my favorite).

So do you have dreams of dating the keeper of the secret recipe? Well download Steam to your PC and start getting some finger lickin’ good Colonel!….that sounded bad.