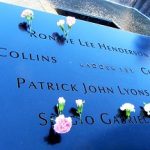 Every year, I share my story on this day because if you were old enough around that time, you remember exactly where you were during that day.

Sept. 11, 2001…a day that will never be forgotten and is now being taught in history books. How has 18 years gone by so fast? Every year, I share the story of where I was.

I was a freshman at Kenowa Hills High School in Walker, MI. The year had basically started and I was beginning to understand what high school was all about, you know, like a usual freshman.

I was heading to my Second Hour class, before I reached the room for the class, I glanced into Mr. Robillard’s room and saw the TV on through the hallway. Each one of the rooms had a TV suspended from the ceiling with a VHS player…just to bring you back to that time. I quickly just glanced at the TV and saw two images, I thought these images were just reports of a volcano exploding. I didn’t think anything of it until I got into my 2nd hour classroom with Ms. Dykstra, where I glanced up at the TV and saw the headline below in all caps…

The entire classroom was silent, just the high pitch from the tubes of the TV and the reporters trying to sort the entire thing out as best they could. It was then I discovered how it all happened…planes, buildings, explosions…it was insanity. We as roughly new teenagers tried to figure it out, thoughts of war started springing, are we getting drafted, are we going to die?

It was confusing, depressing, and empty….empty is a good word I feel. We knew from that day, nothing was ever going to be the same…and it really wasn’t. I was in a History class watching history unfold in front of my very eyes.

It’s crazy to think that high schoolers today are learning about this event through textbooks and teachers, teachers that are probably my age when they saw it all happen. A lot of adults now that are crossing the age of 18 were never witness to it.

It was unlike any day I have ever witnessed in my life, and if you weren’t around at that time or are learning about it just now in textbooks…that day was a feeling that I hope to never feel again.