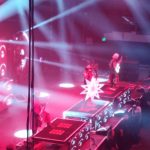 So, Rob Zombie and Korn are my favorite 2 bands, and looks like Rob Zombie already has a new record finished!!  Is this heaven?  New Korn album comes out tomorrow (Friday the 13th), and now new Rob Zombie on the way?!  Zombie was waiting to talk about the record because of his new movie that is set to premiere in a few days, “3 From Hell”.  (Which I’m INSANELY STOKED to go see!!)

“The record’s definitely finished and, like John says, I think it’s the best record we’ve ever made,” said Zombie.  “It’s a very big, crazy and complex record that I’m really excited to finally be able to release.”

He continued, “I just had to get everything with 3 From Hell completely finished before we got into that, but my plan now is to start shooting some big videos for the album around January so that we can release it early next year. I’m hoping for a February 2020 release.”

Trailer for “3 From Hell”