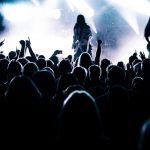 You know those nights where you can’t sleep?  Your brain is filled with thoughts that are causing you chaos.  Korn’s new album, ‘The Nothing’ is fueled by chaos that life sometimes brings upon us.

Their 13th studio album, ‘The Nothing’ released today on Friday the 13th.  It’s their 13th album, and has 13 tracks.  Singer, Jonathan Davis says, “Our 13th record comes out on Friday the 13th, which is a full moon, and I think Mercury comes out of retrograde,” he says. In both a physical and metaphorical sense, he surmises, “All the stars are lining up.”

Davis says that this record was not fun to make, because he wrote it while he was grieving the loss of his wife.  The songs definitely reflect the pain, and I must admit that I’m loving the aggression, especially in their song, “Cold”. (Below)

Here are my top 3 favorite songs so far off the record: