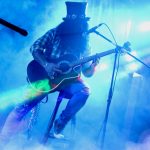 September 17th 1991 was a big day in music history. Guns N’ Roses released their epic 2 volume album, Use Your Illusion. What were you doing back in 1991?  I was 13-years-old, which means I would have just started Jr. High School.  Such an awkward time in a kid’s life!  Trying to fit in at school, while going through puberty.  Man, what a mess!!

This is the first album by Guns N’ Roses that I remember listening to, because at that age I was searching for any kind of escape, and I found it through music.  My dad had bought the album, and I played it one day after school, and then every day after school there after.  I’ll never forget the blue and red album art.

30 songs between the 2 volumes, this album was epic!  Of course it’s when we were first introduced to the power ballad, “November Rain”.  Also, “Knockin’ on Heaven’s Door”, “You Could Be Mine”, “Live and Let Die”, “Don’t Cry” and so many others.  (The video to “November Rain” has 1.2 BILLION views!)

Take a walk down memory lane with a few videos.