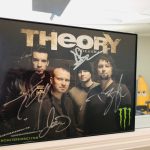 Theory of a Deadman released a new single with a video called, “History of Violence”.  It deals with a pretty hardcore subject matter. An abusive relationship, with the female victim finally deciding to fight back.

The band plan on releasing a new album on January 31st called, Say Nothing.  They’re getting a jump start to promote the single and album by announcing a Fall tour.  They’ll be playing two venues here in Iowa.

Check out their new song/video below.