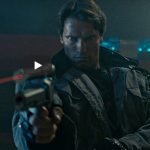 Yesterday, I was having a really bad day, so when I got home…I immediately wanted to watch a 1980’s action flick.

I decided I wanted to watch The Terminator from 1984. It’s one of my favorite films ever and solidified Arnold Schwarzenegger as a film star. I not only love the story of it, but the practical effects they did because computers weren’t as strong as they are today. As I was watching, I got to the scene where Sarah Connor ended up in some nightclub named Tech-Noir, and as I was watching it…my film brain took over.

It might be one of the best action scenes ever filmed.

Through out most of the movie, there has been the build up of Terminator coming after Sarah. Meanwhile, there is a soldier named Kyle also searching to save Sarah. The movie is just building up this tension of WHO is gonna get to Sarah first….will she die? Or will she live? Who’s gonna make it to Sarah first? We then get to this scene where Sarah calls the police while she is in the Tech Noir Dance Club, and we add another portion…are the police going to get there? WHAT IS GOING TO HAPPEN?

You see the Terminator, Kyle, and Sarah ALL in the dance club…and the 2 most effective scenes is when Terminator slowly sees Sarah and walks through the crowded club. It’s the FIRST Terminator sees Sarah, but he doesn’t attack right away, making it even more tense. The music syncs up so damn perfectly and flows with the scene incredibly well….meanwhile, Sarah is looking around, sees Kyle who then slowly looks at the camera….these 2 parts build up the tension of scene unlike any other action film, it’s near perfect.

Come to think of it, if you are seeing this for the first time….you don’t know if Sarah is being HUNTED by these 2…or one is there to kill and the other to save…we find out once Kyle unleashes shotgun blasts on Terminator and utters the words ‘Come with me if you want to live.’ Then we have our story and you are left breathless.

The writers knew exactly what to do here, and it works so damn well…its things like this that make that movie so effective and the direction that James Cameron was implying.