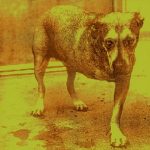 24 year ago today, the last album featuring singer Layne Staley was released upon the world.

Alice in Chains released their self titled album, 24 years ago means the year was 1995. I was only 8 years old, and I’ll admit, I had no idea what Alice in Chains was, but I did remember that the movie Die Hard with a Vengeance was the big movie at the time!

The album featured song like Grind, Heaven Beside You, and Again.

During the time of this album, Staley was battling his heroin addiction pretty hard. Even at one point overdosing, but recovering, forcing the band the go on and off hiatus during the time. I think what we got out from his experiences is one very dark album.

Staley ended up passing away in 2002 and the band disbanded. They eventually did return to the stage with a new singer named William DuVall and it’s been that way ever since.