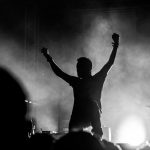 Anyone who has tried getting sober has their own unique path of how it went down.  For most of us alcoholics/addicts, the path is riddled with chaos, loss, hospitalizations, institutions, torturing our loved ones, mental/physical pain, loneliness, wreckless behavior, shame, guilt and wishing we would die.  I describe that period of my life as true “HELL ON EARTH.”

For those of us who are/were able to rise out of the depths of hell, we begin see life with brand new eyes.  Hope begins to emerge and we learn how to smile for the first time.  Makes sense why Ivan Moody would want to use his path to sobriety in the lyrics for Five Finger Death Punch’s upcoming album.  You can’t get more authentic, gritty material than that in my opinion, and holy crap… I can’t wait to hear it!

Moody recently celebrated one year on the wagon after years of alcohol abuse.  F**k YES, man!!

Two years ago, Moody’s alcoholism was threatening his position in the band. Their guitarist, Zoltan Bathory said that back in 2017 the band gave him a not so subtle ultimatum.  They told him he’d be out of a job if he didn’t clean up. “We had to … threaten him that we’re going to take away the last thing that he loves, the band,” Bathory remembered of the intervention. “And it’s a bluff. We didn’t want to do that, but we had to say that. We had to say, ‘Listen, if you don’t do this now, you’re done. You’re out.”

I call that tough love, and it obviously shows that his band mates care about him.  I relate to what they did, because for me, it took the loss of everything and everyone in my life before I became WILLING to give life a shot. Thankfully, Moody has had success with his sobriety, and that ultimatum didn’t have to come into play.

Their new album is slated to come out sometime next year.  The band won’t be playing any of the new material on their current tour.  They’ll be saving it, and MAN… I CANNOT wait to hear it!  Keep it up, Ivan.  You found your way out the black night terror and broke through the once invisible surface into the light.  Welcome home, my friend…