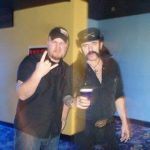 The song that when people think of Motorhead, they think of was released this day 39 years ago!

That’s right, the track that you blast on your radio ‘Ace of Spades’ was released this day 39 years ago on the album of the same name.

Motorhead to this day is still the loudest concert I have EVER attended. I had to step out of the concert for a brief moment because of how loud it was and grab a pair of earplugs! When they say Motorhead took no prisoners when they performed live, they sure didn’t. I also met Lemmy that night and took a picture, which I am so happy that I did!

39 years ago, we didn’t want to live forever!