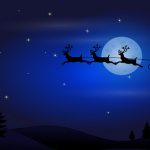 It’s almost that time of the year, and Fozzy’s Chris Jericho is ready to deck your halls bub.

Fozzy’s Chris Jericho has released a brand new track solo wise, not seemingly with Fozzy of a cover from a popular Kink’s song from 1977…and that of course is ‘Father Christmas.’