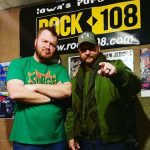 Every once in a great while, I get calls or messages from listeners showing gratitude which is an amazing feeling!

About a year ago, Drowning Pool was playing the show at Spicoli’s in Waterloo and I got this great message from a listeners mother. I actually do remember meeting this fine person and it was a brief moment, but he was a cool dude! The next day I got a message in my Ned-Rock 108 inbox that you can read below. I deleted the names just in case.

“I just wanna tell u since I am already bugging u, cuz sometimes I think u don’t truly understand the impact u make on people’s lives, but……my oldest son,  (NAME) who is 22, thinks u r the greatest ever. When I brought him to his first show at spicoli’s a few years ago(drowning pool), he was WAY more excited to meet u and have his photo taken with YOU, than he was about meeting and talking to the band and getting stuff from them. I went to warm up the car, and when he and his couple friends came out, the were smiling from ear to ear, especially him. I asked wth happened after I came outside, and he said “ I GOT TO ME NED!!! It was so fucking cool” and of course I was like “Ned who???””(no offense, but the way he was reacting, u would’ve thought he met God or something). He was actually upset and shocked that I didn’t have a clue. Then he said “NED!!! Rock 108 NED!!” Not that ur not cool and all, but it just caught me off guard. Sorry. But, I just wanted u to know, to him, u r a God, and u have helped my nerdy, computer/gamer genius, come out of his shell, and find his niche and his comfort, and u helped him see that all of that IS actually cool and nothing to be ashamed of.”

It’s not everyday I get these, but when I do…it’s just the best feeling. I beyond appreciate the love I get for being your voice on Rock 108, but I gotta say, you guys make it so much more awesome! My favorite thing from all that is this line here:

and u have helped my nerdy, computer/gamer genius, come out of his shell, and find his niche and his comfort, and u helped him see that all of that IS actually cool and nothing to be ashamed of.”

THAT….that right there is what is most important. The fact (NAME) found that his personal being is nothing to be ashamed of is one of the most powerful things I will ever read! So, if you’re reading this (NAME)…keep being you, and F**K what society says you SHOULD be.

NEVER be ashamed of who you are, what you love, or what you look like…unique is the only way to live.