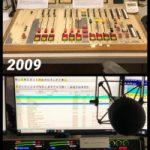 One of the trends circulating through Facebook last week was the 10 Year Challenge. The idea is to post a photo of yourself from today and 10 years ago. I have the proverbial “face for radio,” so I chose a different way to participate in the challenge.

The photo was my view behind the ROCK 108 board 10 years ago. That board produced a lot of great radio. I interviewed Slash (Guns N’ Roses) on that board. We had numerous in-studio appearances from bands who played acoustic sets through that board. Hurt, Royal Bliss and Bobaflex were some of my favorites. I even had an in-studio with WWE Hall-Of-Famers Bret “The Hitman” Hart and the late “Rowdy” Roddy Piper on that board.

After spending 10 years with that board, I left it behind June 2012 to start a family.

December 23, 2017 I started a podcast called “Badgering The Hawkeye” with Mike Thomas, another former ROCK 108 jock. He and I talk about music, crazy events and share radio stories. But that’s when I got the itch to get back on the air again. I called Russ to see if had any need for “an old radio jock.”

May 1, 2019 I was sitting next to the board again. JP was announcing his departure and that I was his fill-in. I can’t express how surreal it was to be walking into the ROCK 108 studio again after so long. It was like walking into a memory. I was also surreal to be sitting in the same spot I had when JP and I were doing mornings in 2005. I was happy to be back at a station that had helped me to define my radio career.

Fast forward to today. I am a family man. I have “matured.” I enjoy that I am able to work with a new radio family. Russ, Ned, C.C. Connor and Alex welcomed me to their inner-circle.
I am excited to host your Saturday mornings and the Throwback Thursday Track during C.C’s show.

Let’s see what trouble we can get into over the next 10 years.