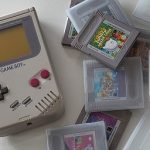 You know me, being the YouTube guy and finding all of the crazy videos that I can, but it really started with this guy.

James Rolfe, aka The Angry Video Game Nerd has been making really quality content since 2004 and he is still going today! Internet gamers like Pewdiepie, Ninja, Game Grumps, or whomever are all making major money with what they do…but it really all started with a guy, sitting in his basement, playing video games and complaining about how bad they were! James is credited with starting that whole ‘retro-review’ thing.

His signature potty mouth and creative uses of the word f^%k, drinking Rolling Rock, and yelling at the games of his childhood has been a YouTube/Internet staple since 2004, and I have been there since the beginning.

He still cracks me up….James has a certain style about him. He is a gamer yes, but he is first, a filmmaker, and it really shows. Just watch some of his early work compared to where he is at now, and there is a visible difference in his content, and as a guy that appreciates creative film making? This dude is something special, and still great and entertaining to watch. Where other peoples Let’s Play content may get old over the years, I can continue watching AVGN episodes from years past and still have it be fresh.

They’re more like movies than internet videos…the quality and the writing work extremely well, and I personally feel will keep going that most internet personalities.