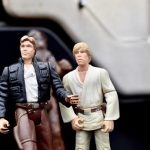 Star Wars: The Rise of Skywalker hits theaters tonight, and it marks the end of the Skywalker lineage of the movies.

Of course Disney is gonna milk the Star Wars franchise for all it’s worth, and that is fine. Hell if they keep making shows like ‘The Mandolorian’ that’s fine, cause that show is pretty fantastic. But, the Skywalker Saga, the one we all know and love, ends tonight. Star Wars has been around for generations and has brought wonders to kids and adults of all backgrounds, and nicely enough, each generation so far has had their own ‘Star Wars Trilogy.’

I was introduced to Star Wars at a VERY young age, probably around 4 or 5…so around 1991. The newest movie at the time was Return of the Jedi (1983), so I was a couple of years out from it being pretty new. Toy stores didn’t carry toys and the movies were now just…old movies. Oddly enough though, I remember my Aunt would go to antique and collectors fairs, and on my probably 4th birthday…she brought me a present that was filled with original Star Wars figures from the 70’s & 80’s. They were my first Star Wars toys, and from that point forward….Star Wars became a massive part of my life.

Watching Luke Skywalker discover who he was, becoming a Jedi, dealing with loss, and finding out that he is only hope….it’s amazing. The movies were re-released into theaters in the mid-90’s with some new added effects (AKA Special Editions)…while they are criticized today, at the time? It was magical to see them on the big screen for me. All I ever had were the VHS tapes! Then of course the infamous prequels of Episode 1, 2, and 3. This was MY generations Star Wars movies…while they are seemingly hated today, I still have a love for them. Not so much Episode 2, but Episodes 1 and 3 are still fun to watch.Then we come to today, where Star Wars hype is back in action, Episode 7 was fun as hell, Episode 8 has it’s flaws, and then it all ends tonight with Episode 9.

I have collected Star Wars, played with Star Wars, dressed up as Darth Vader for Halloween, listen to the soundtracks, referenced it in everyday speech, had light saber battles in the movie theater parking lot, played the video games, etc.

2019 has seemingly been the year where I have been putting things to rest. This year was (most likely) the final time I will ever see KISS, and now the ‘Skywalker Saga’ comes to a close in Star Wars….all good things must come to an end I suppose.