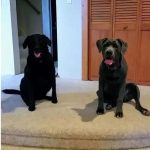 Before the year ends, I thought I’d leave you with an uplifting story involving dogs, a family who loved them, and a company with heart.

With all the on-line negativity and my belief that en-masse, animals are much better than humans, it’s refreshing to write a story about the goodness humans can have towards each other.   Laura Waltenburg’s sister and her husband owned two beautiful dogs, but they suddenly passed away and they had a large order of dog food underway from Chewy, which arrived after the two dogs died.  Here’s the story from the benefactor’s sister:

“My sister and brother-in-law tragically lost both of their dogs this past weekend. After this happened, they received two 40-pound bags of dog food that they had ordered from the Chewy company. My brother-in-law sent them an email requesting permission to send the dog food back for a refund, minus the shipping cost,” Laura wrote on her Facebook profile.

The company told them that the refund was no problem, but they then showed kindness and offered an even better offer. “They credited their credit card for the full purchase price; and asked them to donate the dog food to a local shelter. They sent a second email requesting a picture of one of the dogs to put in their memorial book, to honor her. And then today, my sister and brother-in-law received beautiful flowers from Chewy. I wish I could tell everybody this story… This is an incredible company!”

I know this sounds like an ad but it’s not.  In my opinion the mid-sized internet companies seem, for the most part, to have more soul than the big box retailers of old and I think (I hope) traditional big-businesses are learning from them; a little compassion for your customers goes a long way in building brand goodwill.