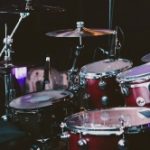 I heard the news on my birthday. 3:36 p.m. Ned & Russ came back from break and said “Kind of a sad day today. We’ve lost a legend in the rock world.” When they said it was Neil Peart of Rush, my heart sank. Neil was the driving force of the three-piece from Canada.

Let’s rewind for just a second. While I just had a birthday, I am not old enough to have experienced Rush during their run in the 70’s. Actually, it wasn’t until I was 14 or 15 that I even heard the band for the first time. My friend Tom and his father, Mike had put “Tom Sawyer” on a mixtape. Think back to hearing that song for the first time. You thought it was a female singing too…

Tom & Mike laughed when I brought that up to them. They began to educate me on the intricasies of how Rush crafted songs. More specifically, Neil Peart. I was told about the massive drum kit and Neil’s tremendous drum solos. I was also educated that a three-piece rock band could sound just as big and powerful as any other. The talent just has to be there.

A radio co-worker was also a Rush fan. He introduced me to the Rush documentary, “RUSH: Beyond The Lighted Stage.” As of this writing, I have watched it at least ten times. It is not just a coming-of-age story. It is a look into the three personalities that were Rush. The documentary was released in 2010 and is still available on several digital platforms.

I am saddened by the loss of Neil Peart. I know that he is no longer suffering. We can continue to enjoy his creative contributions for the remainder of our lifetimes. Rock In Peace, Neil.