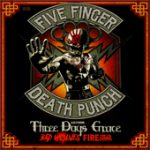 Did you have tickets to the Five Finger Death Punch show in Des Moines from a couple weeks ago? Originally the show was postponed until a further date following emergency surgery for guitarist Jason Hook…however moments ago, a statement from the band and the Wells Fargo Arena in Des Moines has this to say.

Let’s hope they make it back this way soon.