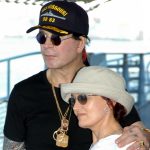 Ozzy is a living icon and legend, and I love that people want to pay tribute to him as a LIVING person.  So often tributes are given after someone has passed.  That’s why I’m STOKED as hell that A&E, as part of their “Biography” series, has produced a new documentary about Ozzy to celebrate his life!  It’s called, “The Nine Lives Of Ozzy Osbourne”.  It will make it’s debut at this spring’s South By Southwest festival, then hopefully air on A&E shortly after.

Ozzy says in the trailer, “I use the talent of making people feel somewhat entertained when I was goofing around — to take it onstage with my music, I suppose, is the same kind of a thing.”

Check out the trailer below!