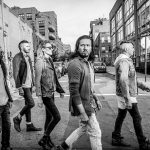 Pop Evil has been out supporting their self-titled album for the past couple years now, and with the album cycle coming to a close, the band is out doing some really special shows before they rev up for 2020.

Rock 108 is pretty familiar with the band as we have been playing them ever since they released their first album, ‘Lipstick on the Mirror.’ I personally have the pleasure of being part of the Pop Evil machine since it’s inception when I worked at the radio station that broke them into the mainstream. As years have gone on, we’ve developed a friendship that keeps going on for I hope years to come!

Not only did Leigh and I just share some laughs, but he also dropped the news that the band has PLENTY of stuff written for their next album…about 30 songs in total! Which is pretty damn exciting! If the next album has any kind of the sound that we heard on the recent album, I’m stoked.

Check out our chat below….next time they are in town? We’re goin’ axe throwin!