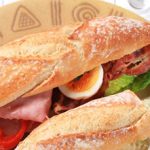 (CNN) — The Food and Drug Administration (FDA) has sent a warning letter to the sandwich chain Jimmy John’s for food safety violations.

Jimmy John’s is accused of putting contaminated clover sprouts and cucumbers on sandwiches sold in Iowa during November and December 2019. Twenty-two people have gotten ill from E.coli and salmonella from consuming the food.

Sprouts Unlimited Wholesale Foods of Marion also received a warning letter for delivering the sprouts to Jimmy John’s. The FDA says the latest outbreak is part of a pattern for Jimmy John’s. Evidence of five other cases was stated in the warning letter.

Sprouts are notoriously difficult to clean because of the way they grow in tangled bunches.  Cucumbers however are not, so we have to ask how well were they cleaning the vegetables they were putting on people’s orders?