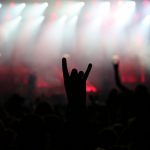 34 years ago in 1986 Metallica released their 3rd album, Master of Puppets.  This album was huge for Metallica AND the world, because it’s known as the album that propelled thrash metal into the mainstream.

I was almost 8-years-old when this album came out.  I discovered it later when I was about 13-years-old.  I would spend the night at my friend, Kathy’s house, and her older brother was a HUGE Metallica fan.  Me and Kathy would be hanging out in the living room at her house, and I could hear this music pumping from her brother’s room down the hall.  Seems like he never left his room, but one time I caught him going into the kitchen.  I asked him what he was listening to.  I’ll never forget what he said.  He said, “It’s Metallica, Master of Puppets.  Like you would like it.  You probably listen to Debbie Gibson.”  Haha!  Little did he know.