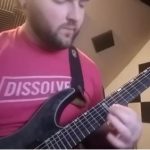 Noise from the Garage host and weekender Alex went to Mexico about a week ago, and due to new rules…he is forced into quarentine.

Because of that, Noise From the Garage is off for a couple of weeks, but Alex is making the most of his time hanging out at home, playing video games, practicing guitar, and probably hasn’t put on pants yet…cause why would you?

So you saw the practicing guitar part, and you may know he is in a band named Guilty of Treason…so why not practice while stuck at home, and would you know it? He recorded some quick shredding on his Facebook page.