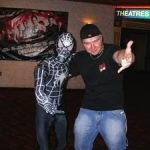 So what does Spider-Man 3 have ANYTHING to do with my radio career.

Well, the movie isn’t that great…but it’s oddly a milestone in my radio career because the premiere of this movie was the FIRST RADIO EVENT that I ever participated in…and how the hell has 13 years gone by?

13 years ago, I was 19 years old and just starting an internship at a radio station, I was pretty fresh outta high school, wondering what the hell I wanted to do sitting at Grand Rapids Community College, when suddenly it clicked that I wanted to be in radio. It was music related, I got to be a public figure, and I still got to have some kind of family life….it was nearly perfect.

13 years later (and not in this order), I got married, moved to Iowa, graduated college, worked countless hours, and really just wanted to be in radio…and so far? It’s been a helluva ride, and it ALL started with a premiere of a mediocre Marvel movie.

Here’s a funny part though and I didn’t know this until much later, but my wife before I even knew she existed ALSO happened to be at that SAME SPIDER-MAN 3 PREMIERE! IN THE AUDIENCE! Funny part though as my fellow co-workers were doing the intro and welcoming the crowd, my now wife was checking out my other co-worker…ha!