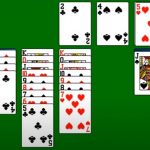 You know you have played, and there is a large possibility you are playing it right now.

The classic card game Solitaire! You want to play it, but you also don’t want to set it all up right? Probably not! But when Window’s showed up on Personal Computers back in the year 1990? It had a digital version of the classic card game….and people got hooked. The game was nothing new, but before the internet existed….computers had BARELY anything on them like they do today! Word processor, MS-DOS, a floppy drive…and would you know it? You had to turn the damn thing on usually from the back AND the monitor separately WHOA!

But they did have one thing….Solitaire….and it’s been 30 years since we are able to first play that classic version.

As a kid during this time, playing a game on a computer was pretty mind blowing…and honestly…I still suck at Solitaire. My fascination with the game was more the fun card decks you could choose! I always went with either the Beach setting or the Haunted House…why? CAUSE THE BATS MOVED! AHHHHH!