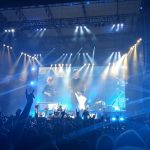 Chances are you probably were, cause I was there and I think anyone that lived in the state of Iowa was at the Iowa Speedway in Newton on June 9th….but why? Metallica was performing, and it was f(*kin’ epic. Not only did Metallica rock the joint, but Volbeat and Avenged Sevenfold also brought it to the show.

The weather was perfect, TONS of amazing Iowans showed up, and even Ashton Kutcher…what a cool day! Water cost me like $90 I think, but I didn’t care, I was finally seeing Metallica for the first time ever at a massive racetrack with thousands of fans! I was lucky enough to get on the track and get reasonably close to the band. Song after the song the band ripped through their set, and easily to this day, was one of my favorite Iowa days ever.

The drive home was brutal though, as me and our former guy Cross and former weekend lady Payton all drove back to Waterloo with me in the driver seat, like I usually am. We stopped by a Casey’s cause Cross and I were dying of thirst and hunger, Payton passed out in the backseat. We went in, grabbed a stack of Ding Dongs and each of us a gallon jug of water, which I proceeded to drink the ENTIRE gallon. Ahhh that classic post concert munchies.