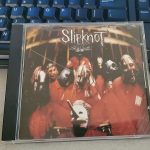 21 years ago, the band from Iowa released the album that brought them among the world.

Slipknot, on this day back in 1999 released their self titled debut album….no I’m not talking about ‘Mate.Feed.Kill.Repeat’…I’m talking about the album that when Slipknot fans talk about older Slipknot? This is the one they are usually referring too.

What a great album this is, songs like (Sic), Eyeless, Spit It Out, Liberate, and of course Wait and Bleed!

When the album came out, I had NO idea who they were…I was just getting into any kind of rock music, Nu Metal was a NU thing (see what I did there?), and I was busy watching Star Wars Episode 1! It wasn’t until Slipknot released ‘Iowa’ is when I found out about them and I was in High School…from that moment I was a fan.

It all started here, and you awesome Iowans made it happen.