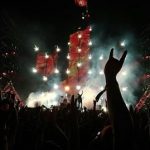 2020 was ramping up to be an insane year of live music.

I remember back in January how I was announcing seemingly EVERY SINGLE DAY about a new tour popping up…whether it be Rammstein, Green Day, Rage Against The Machine, Godsmack, Motley Crue, Poison….seemingly EVERY band was going to head out on tour…and then you know what happened. Thanks to the pandemic, it has forced nearly every single band to sit inside and wait it out until things can get back to a new normal…what does the new normal look like? No idea.

Every single band though has either rescheduled their tour or simply cancelled them, leaving 2021 to be an absolutely insane year for live music. Festivals, concerts, and most likely all sorts of new music coming from your favorite artists that you listen to every single day. I’m actually quite excited for new rock from all these people, and who know…maybe even some interestingly shot music videos!

However, even writing that statement out? I have no idea if there is any truth to it….I want to believe we will be out of the pandemic by next year, but with numbers growing again? I just don’t know, I’m not a doctor…but I can sure hope.