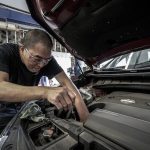 I can’t believe I have to ask this question, but due to recent situations I have been witnessing.

Do you check your vehicles fluids? Oil, transmission, brake fluid, power steering, etc….or maybe I should ask this question…do you know how too?

A friend of mine recently had a MAJOR issue in his car…his engine seized up, which if you know cars? That means the damn thing is dead. He told me the cost to repair it, which means a whole new engine is going to set him back $7100!!! On a vehicle that has 93,000 miles on it! HOLY CRAP!!! So I asked him why that happened, and his reply was…

‘My sensors didn’t detect a leak I had, so I had no oil.’

I then asked when he checked his oil last, and he said ‘When the mechanic checked it four months ago.’ Thus, he (my friend) NEVER checked his own oil in that 4 months, I also guessing he didn’t check for any oil spots on his driveway. When I told a co-worker about this, he replied that he doesn’t check his oil either!

Maybe I’m the crazy one, but…isn’t it a good idea to check out engine fluids regularly? You invest thousands of dollars into a vehicle. It carts you around to your livelihood, your family, brings the groceries home, etc!

I own a car from the year 2000 that has VERY limited computers in it…no screens, no heated seats or steering wheel, and the passenger window doesn’t work. No plastic coverings over the engine to make it look nice…I see the dipstick, I check the oil and done…it takes me about 1 minute, and that sucker has 224,000 miles on it.

Check your fluids people…and if you don’t know how? Look it up online…it could save your thousands.