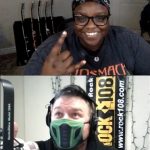 One of the biggest up and coming bands of 2020, is a band named Tetrarch.

On Rock 108, you can hear their track ‘I’m Not Right’ which is probably one of the heavier songs that we play on normal rotation right now, and according to Rock 108 Nation research? You’re digging it too! I was able to snag some time from the band as they are stuck in quarantine unable to get out there and promote, and awesomely enough? Able to chat with guitarist Diamond Rowe!

While the band may not be able to do their thing, they are stuck at home but doing their best to make sure the tracks get out there, and have their label debut album coming this way too! So what did we chat about?

Diamond was awesome, and you should really check out Tetrarch if you want some heavy ass nu-metal? Tetrarch has your fix.