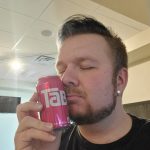 TaB Cola….remember that? I sure do.

Announced today, Coca-Cola has announced that the diet beverage TaB cola will be discontinued after 60 years of production…and now I’m sad.

Chances are you probably had no idea that TaB cola was still around, but it was…but only in 12-packs, and I have a strange relationship with it. For some reason in High School, my best friend Kyle and I LOVED the movie Austin Powers, and at one time during the movie, Austin is seen with a small pile of TaB cans. So? Kyle and I traveled to our nearest grocery store and found a 12-pack, cracked a can, took a sip…and was hooked on mediocre soda.

Truthfully, TaB really isn’t that good…but Kyle and I were so committed to the joke that we became those guys in High School drinking an obsolete soda that we ended up kinda liking it.

RIP TaB, and RIP a joke that turned into a stupid love of soda.