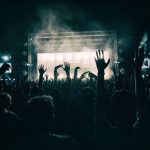 October 10, 1989 was the day the world was introduced to Nine Inch Nails.  They unleashed their debut album, Pretty Hate Machine 31 years ago.  When I think of NIN, I think of music to play while getting it on with someone.  It’s SO DARK AND SEXY!  I’ve always been a die hard industrial rock fan, and this album was/is sooo up my alley.

Trent Reznor moved from Pennsylvania to Cleveland and was working nights as a handyman and janitor at Right Track Studio. When he wasn’t working, he found small amounts of free time to record his own music that would become the start of Pretty Hate Machine.