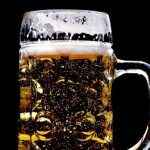 I feel like this is something that has been a long time coming, but Pantera will be releasing it’s first ever branded beer in March of 2021.

The beer will be named ‘Pantera Golden Ale,’ and will be brewed by Texas Ale Project….and of course made in Dallas, Texas.

For a band that partied as hard as Pantera did, a branded beer fits this band perfectly. However, the Abbot brothers sure loved their hard liquor too! I think at some point they should have their own brand of Seagram’s or something.