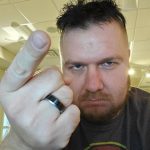 I hate that day.

I hate it with a passion, but not because of the sweet deals, those are fine….but the insanity of people, consumerism, and the amount of yelling at me when I didn’t have the thing that they wanted. Sweat, pain, mental anguish….

Welcome to being a retail working in a video game store on Black Friday.

For quite a few years, I worked at GameStop…I worked there during the time of Playstation 3, Xbox 360, and Nintendo Wii….gaming was THE THING to do. Meaning that everyone wanted to be in it. So when Black Friday would roll around, the deals would get out there and a line would be at the door…but here is the kicker, I worked at a mall store….a place where dreams go to die. The moment that gate lifted up, and people rolled in and the insanity began.

I got yelled at, called names, told that if something didn’t work they’d do everything in their power to get me fired, things were falling over, people were teasing me, calling me on the phone to prank the store, and to make it worse….the air circulation system broke so it reached up to about 85 degrees in the store with about 76 people in it….it became a fire hazard.

All because Mom couldn’t get the cheaper Xbox 360 that sold out in minutes and you came 5 hours later into opening. Nothing like being told that I was the reason that I ruined their families Christmas. Really? I ruined Christmas cause you couldn’t get your bratty kid an Xbox? Sounds like you have other issues lady.

I’ve told these stories many times to friends, and they’d get a kick out of it…but what they didn’t know is that these frequent happenings sunk me into a massive depression for about 3 years…good times.

You might say it’s because of their pressure of the holidays and trying to get little Jimmy that special gift….well….f&^% that….you don’t have to be an a*&%hole about it.

So when you are out shopping for those special gifts, just remember…those store clerks have families they’d like to be with during the holidays…as they try to pay bills, make their mortgage, buy whatever gifts they can for their friends and families…not deal with your stupid entitled selfish bulls^%$.