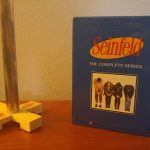 There had to be another way!

Festivus, the day for the rest of us! Popularized by an episode of Seinfeld, the episode shared the legend of Frank Costanza as he went to the store to buy a doll for his son. Another man went for the same doll, and as Frank was raining blows upon the man, he realized there had to be another way! Thus, Festivus was born! I’ll get the pole out of the crawl space.

Make a donation to the Human Fund while we’re at it…it’s money for the people.